For those of us who grew up around shooting sports, there are most likely some happy memories that involve hunting, target shooting or casually plinking away at soup cans with a handy little .22 LR carbine or rifle. These handy, soft-shooting rimfire guns continue to be one of the most popular guns to own in the United States. This is because they are affordable to buy, less expensive to feed, and enjoyable to shoot for beginners and seasoned enthusiasts alike.

Thanks to the platform's undying popularity, there are quite a few options to choose from. The selection includes slick target models, takedown survival guns and a few that defy easy categorization. Here's a closer look at a few of these specialized .22 LR rifles which are currently in production.

Chiappa Firearms offers a single-shot, break-action .22 LR rifle called the Little Badger. Although it is the definition of a “minimalist” survival gun, Chiappa still manages to incorporate some pretty handy features.

This little rifle tips the scales at 2.9 lbs. The hinged receiver allows the gun to fold in half when the action is open for a storage length of just 17". The round profile barrel is 16.5" long with a threaded muzzle for accessories including flash hiders and sound suppressors. The gun ships with an M1 Carbine style set of sights with a fixed front post and an adjustable rear sight. This is a single-action rifle, which means the exposed hammer must be manually cocked for each shot fired. A total of five Picatinny rails can be used for optics and other accessories. A polymer bracket, attached to the wire stock, can be used to store a few extra rounds of ammunition. The Little Badger is available chambered in .22 LR, .17 HMR and .22 Mag. in blued or Cerakote finish options. MSRP: $228-$264.

Henry Repeating Arms offers its own interpretation of the AR-7 survival rifle, originally designed by Eugene Stoner of M-16/AR-15 rifle fame. Since 1959, the AR-7 has been in service with the U.S. Air Force, providing pilots with a small-caliber rifle for emergency landings in wilderness areas. Like the original AR-7, the Henry U.S. Survival AR-7 rifle is light weight at just 3.50 lbs.

When disassembled, the barrel, receiver, and the two provided 8-round magazines can be stowed in the hollow ABS plastic shoulder stock. The stock is just 16.50” long, so it will comfortably fit into backpacks or the cargo compartments of boats, planes and trucks.

Assembly is easily accomplished by removing the shoulder stocks butt cap and extracting the components contained inside. The receiver is attached via a screw in the pistol grip of the stock. Line up a stud on the barrel chamber with the receiver cutout and twist the barrel nut into place. Insert a loaded magazine into the magazine well, cycle the bolt, disengage the safety and the rifle is ready to fire. This carbine is available in matte black or True Timber Kanati or Viper Western camouflage finishes. MSRP: $335-$408

Heritage Manufacturing Inc. is well known for its expansive selection of affordably priced Rough Rider single-action revolvers chambered in .22 LR and .22 Mag. These handy little wheelguns are a favorite for casual plinking and small-game hunting with real-world prices often well below $200. 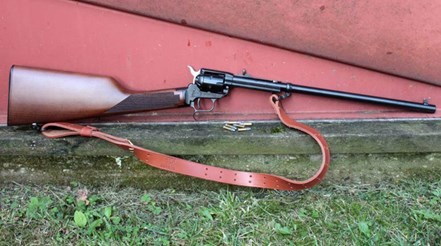 In 2020, the company took its scaled-down wheelgun in a fresh direction when it launched a revolving carbine dubbed the Rough Rider Rancher. Revolving carbines, like the Colt Model 1855, were developed in the 19th century to provide frontiersman and soldiers a reliable, lightweight rifle that fired the same cartridges as their handguns.

The Rancher features a 16.125" round-profile blued steel barrel with an alloy grip frame that has been adjusted to support a straight, checkered-walnut shoulder stock. The action and controls are identical to other Rough Rider revolvers and the carbine can be fitted with a .22 Mag. conversion cylinder. Customers can choose from the revolver sighted version (BR226B16) or the model with a set of adjustable buckhorn sights that ships with sling mounts and a leather shoulder sling (BR226B16HS-LS) MSRP: $300-$333.80

The rimfire SU-22CA employs a blow-back operated action and is fitted with a slim 16" barrel for an unloaded weight of just four pounds. It has an M4-style fixed handguard secured in place by a removable barrel nut. The underside of the handguard has a molded in 5.25" accessory rail suitable for lights, lasers or bipods.

When folded, the SU-22 will fit into a storage space that's about 25" long, 7" wide and 3" deep, making it a good fit for a variety of compact storage spaces. This carbine accepts proprietary see-through SU/PLR magazines available in 10-, 15- or 25-round configurations. Choose from the SU22CA model with a fixed shoulder stock or the SU22E with a 4-postion AR-15 style adjustable stock. MSRP: $425-$500

Sturm, Ruger & Co. created quite a stir in the long-range rifle market back in 2015 when it released the center-fire, bolt-action Precision Rifle. It offered the same features and performance as high-end custom bench rest competition rifles at a fraction of the price. By the end of 2017, Ruger conceded to customer requests for a Precision Rimfire Rifle model chambered in .22 LR.

The receiver is CNC-machined from steel with an integral optics rail and an adjustable-throw bolt assembly. The bull barrel is threaded for muzzle accessories, the AR-15 style fore-end is made from aluminum, the adjustable shoulder stock is molded from durable glass-filled nylon and the AR-15 pistol grip is interchangeable. This rifle has an adjustable single-stage Marksman trigger and accepts the popular Ruger 10/22 pattern magazines in 10-, 15- and 25-round capacities.

Some of the tightest rimfire target groupings I've fired have flown down range through this rifle. It costs a bit more than your average .22 rifle but it's worth the investment. Choose from models chambered in .22LR, .17 HMR or .22 Mag. MSRP: $599

Savage Arms offers a handy, modern interpretation of the venerable over/under combo gun design called the model 42 Takedown. Just as in the good old days, this break-action has an upper barrel chambered for a rifle cartridge, which in this case is either the rimfire .22 LR or .22 Mag. The lower barrel is a smooth bore chambered for 3" long .410 bore shotgun shells. A selector lever on top of the rebounding hammer allows the shooter to pick which barrel will fire each time the hammer is manually cocked to fire.

Slim black polymer stocks support the steel receiver and 20" blued-steel barrels. A lever mounted in front of the trigger guard allows the action to swing open for loading while the manual extractor can be used to help remove spent shell cases. Pressing the fore-end release button allows it to slide forward, away from the receiver. Now the gun can be easily separated into two halves for easy storage. Other features include a polymer sight system, a soft rubber recoil pad and a soft zippered carry case.