I have been pretty vocal about my support for the new XDM 10mm, it is in many ways the perfect 10. High capacity, lightweight, easy to shoot, and very importantly—affordable. It fits the hand like a natural extension, something we haven’t had in a double 10 under $2000 any time recently. I like it very much for bear country, self-defense, nightstand gun, and I would venture a duty gun. But I see something else in this particular 10mm that others may not have thought of. A USPSA Limited Class gun.

Why, exactly, would I choose a 10mm for a Limited Gun? That class has long been dominated by 40 S&W, and usually in a 2011 platform. So why a 10mm, and why the XDM? Well, the XDM part is the easier answer. A 2011 easily costs $2000, plus magazines at $130 a pop. To each his own, but I refuse to drop that kind of coin on a hobby gun, that is really only good for one thing. My XDM set me back $550, plus $27.99 for spare magazines. Since I use an XDM for most things these days, it is easy to train across the family of weapons. And last but not least, nothing I did to enhance my XDM for playing race gun had a negative effect on its reliability. 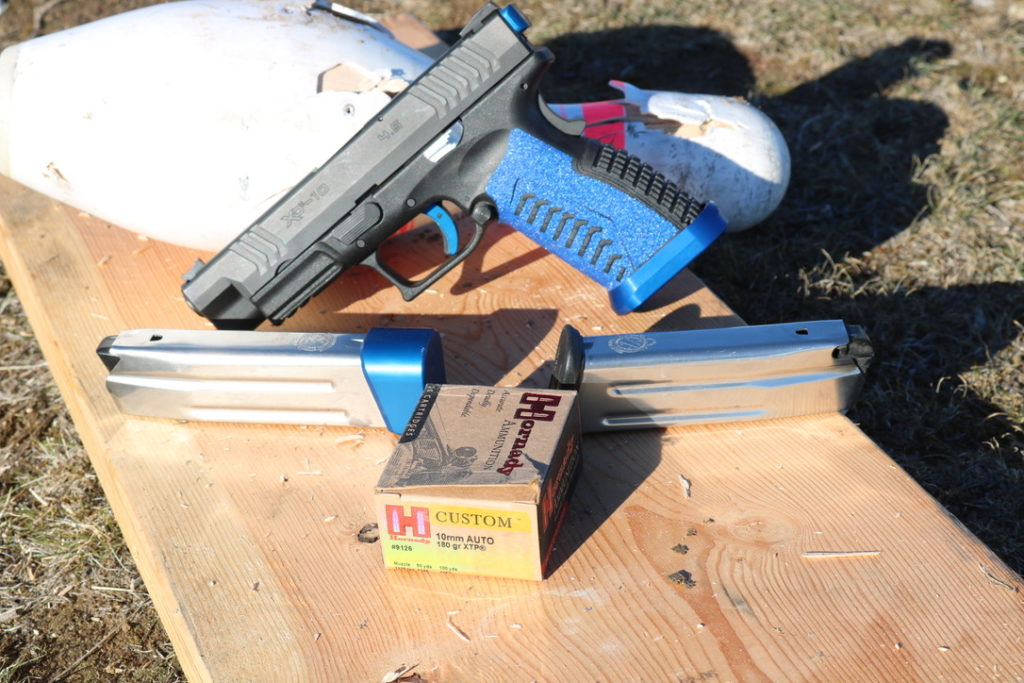 So the gun is understandable, but how about the caliber? Isn’t 10mm overkill, and won’t 40 S&W match it when we slow down to ideal USPSA speeds anyway? I will grant, full power 10mm would be WAY excessive for USPSA. When we talk about that sport specifically, it helps to understand the end state. USPSA has two levels of power, which they check with a chronograph and scale. They call these the Power Factor, with a minimum number for Minor Power and Major Power. They are scored differently, and in almost all cases Major is the better choice in Limited Class. Major requires at least a 40 caliber sized bullet, with a power factor of 165. The Power Factor is calculated very simply. The bullets weight in grains is multiplied by the velocity in feet per second, then divided by 1000. To put this in perspective, a Double Tap 230-grain bullet, at 1155 fps, would give me a power factor of 231.

So if the name of the game is to go as fast as possible, while reducing recoil, don’t I want to be a lot closer to 165? Yes, as close as possible ideally. Even most factory 40 S&W will exceed the 165 power factor by a healthy margin. Why do I prefer the 10mm again? 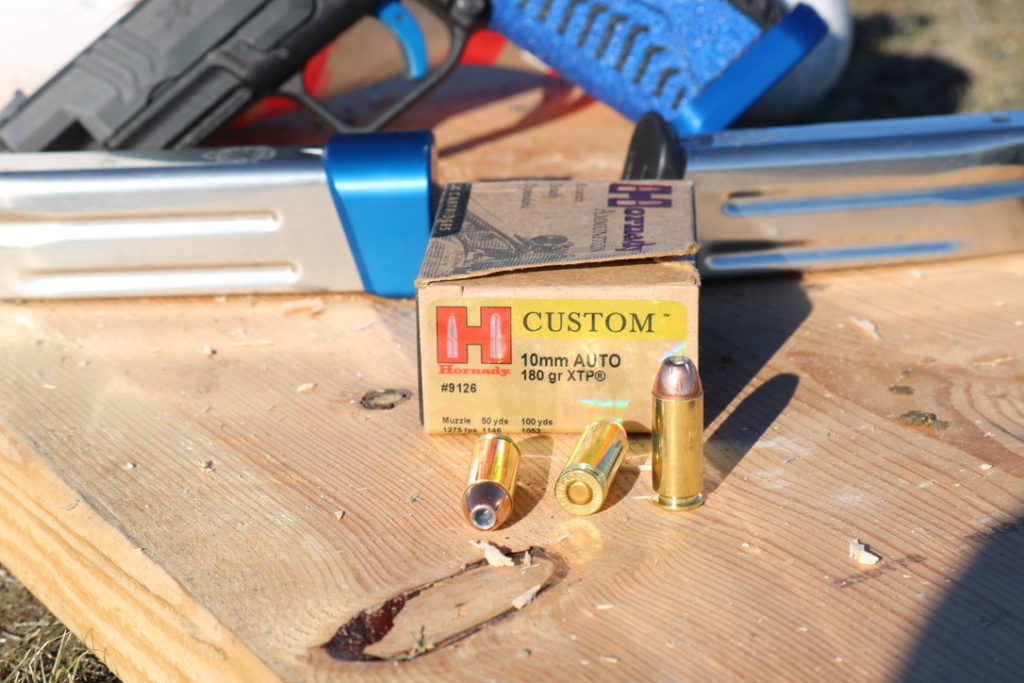 I discovered something years ago trying to make USPSA 40 cal. You would think 40 would be easier to tune. It isn’t. For this particular sport, the easiest way to make the power factor is a heavy bullet, going slow. For 40/10mm, that usually means a 200-grain bullet, though heavier is an option. The problem is, what 40 caliber was designed to do. It pushed the absolute pressure limits available, to replicate the lower end of 10mm, in a shorter case. Basically, 40 S&W is very nearly a catastrophe already, without attempting to shove in a huge bullet. The case capacity is so shallow, even a minor bullet set back increases the pressure drastically. After a hard lesson learned, I won’t even reload 40 anymore. (I actually love 40 S&W for certain things, but I leave the loading to the factory.)

The great irony is that the 10mm, with larger case capacity, is actually the more versatile round. It has the space to accommodate the heavier bullet, and with the right powder balance, push it slower. It takes a little fine tuning, but you can make a 170ish power factor 10mm that is very soft shooting.

So if I like 10mm so much, why haven’t I been using it in USPSA already? Because a gun didn’t exist that fit my parameters. For the platform I shot previously, the difference from a small frame 40 to a large frame 10mm was massive. The large frame was absolutely huge, and I didn’t like how it fit my hand. The greatest thing about the new XDM 10 is how well is contours the hand, which made it a perfect contestant on “ hot rod your polymer hand cannon.” 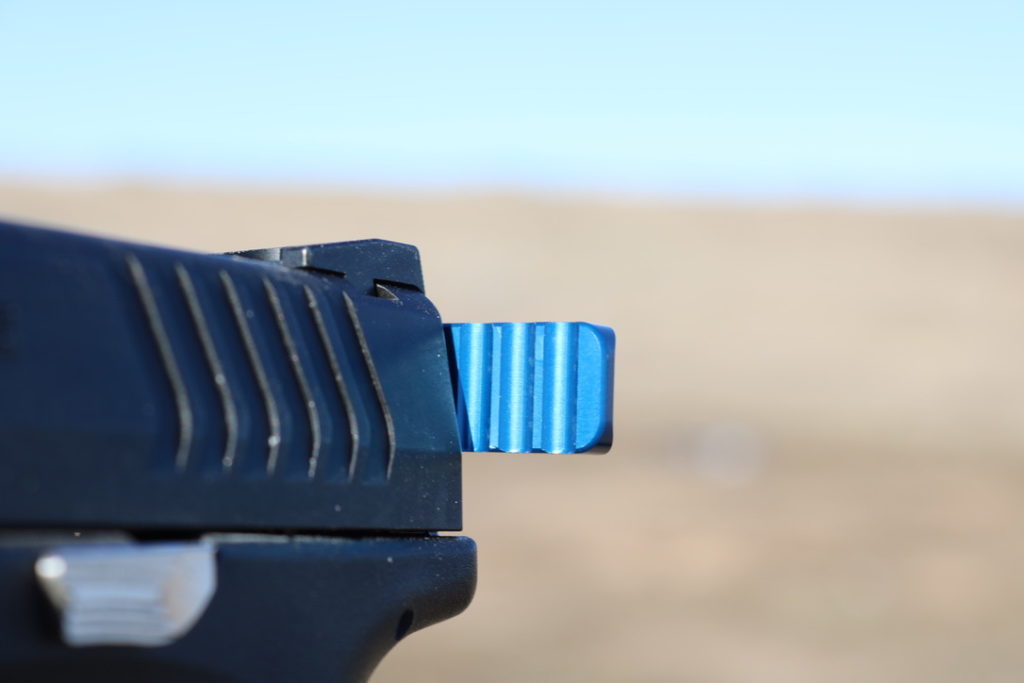 EZ Racker installed on the slide

With the gun part solved, I still needed some tuning to take advantage of the options in Limited Class. What to do? Really, there is only one answer for a question like this. Springer Precision, your one stop shop for all things XDM. I told them to give me the works, and they returned a work of art. 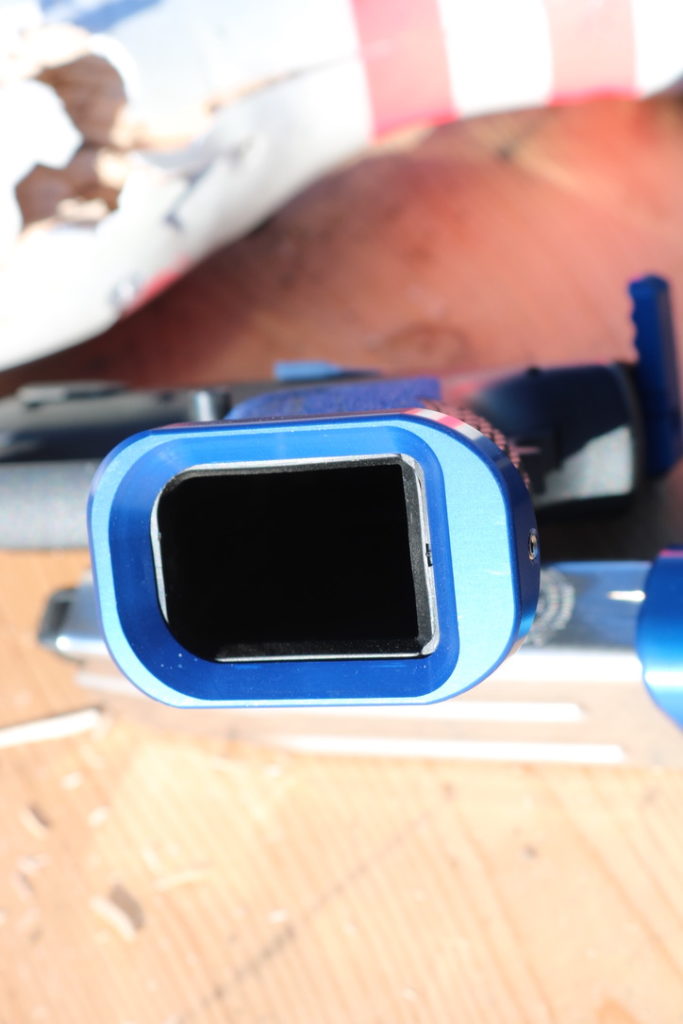 First, they added the obvious needs, a magwell and magazine extensions. The magwell is a gaping chasm, and it makes reloads feel like throwing a ping pong ball in a 55-gallon drum. The magazine extensions are matched and take the overall length to the USPSA max of 140mm. The new capacity is 19+1, up from 15+1, making the XDM competitive with anything in Limited. 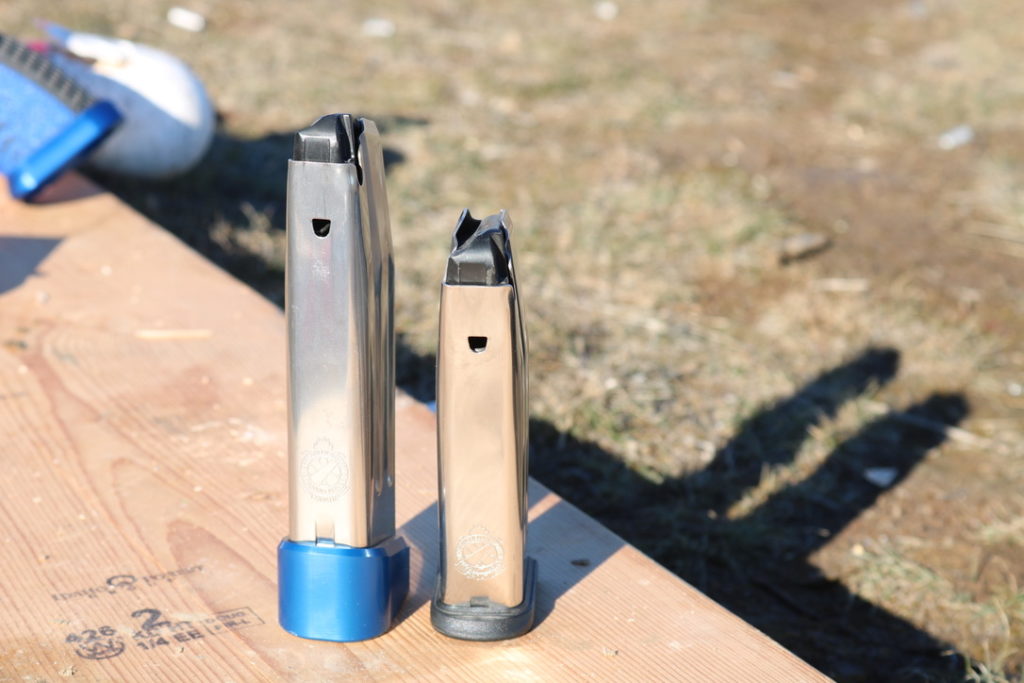 Extended magazine with the added capacity

Next, they shaved down the slide release, for closer palm to frame contact. The XDM family already has excellent grip texture, for a factory gun. Springer Precision turned it up to 11 by installing grip tape, my all time favorite. I prefer grip tape to a stipple job, mostly because it is replaceable. Both wear out over time, but grip tape cost $10 to refresh. The new grip locks into your hand, in a way nothing else does. 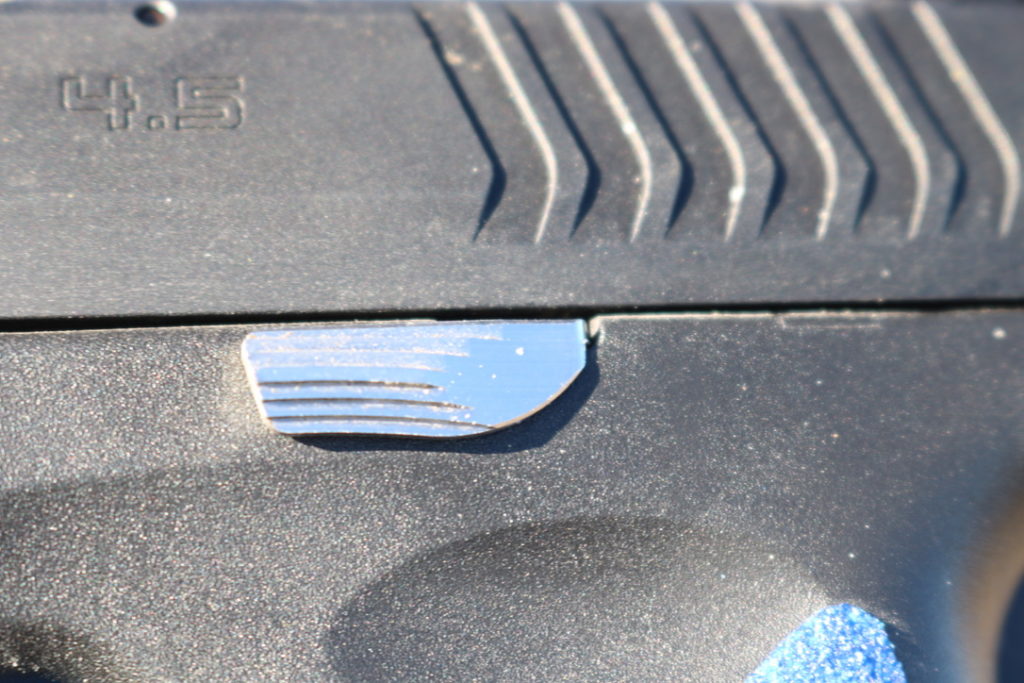 Internally, they added a stainless steel guide rod. This adds weight up front, exactly where you want it. The gain is minor, but you will feel less recoil with one. Every ounce counts. The rear striker cover plate was replaced with the Springer Precision EZ racker, effectively a charging handle hanging off the side of the gun. Not only does this make slapping the slide to the rear fast, but it also has another purpose. The racker acts like a kickstand, propping the gun up a critical ½ inch for table starts. 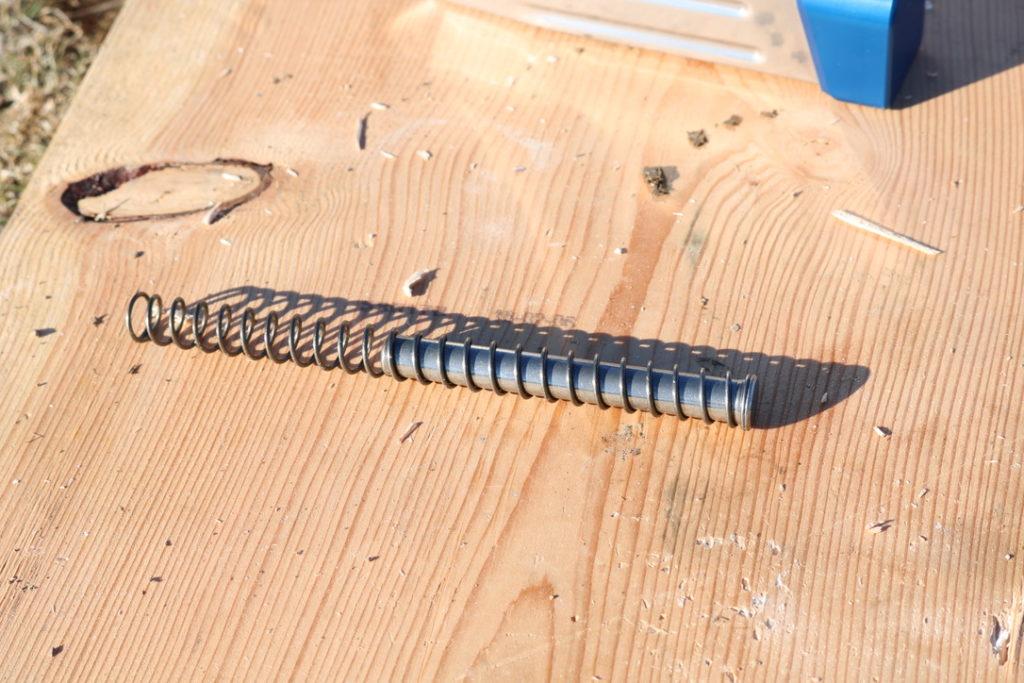 I made an uncommon request as well, which Springer Precision was more than happy to accommodate. XDM pistols come with an excellent set of steel sights, that have proven incredibly durable. But for USPSA, I like a slightly wider rear sight channel than the factory standard. Instead of having to replace the sights, Springer machined a solution. They increased the width by a few thousandths, a job I am very happy with. 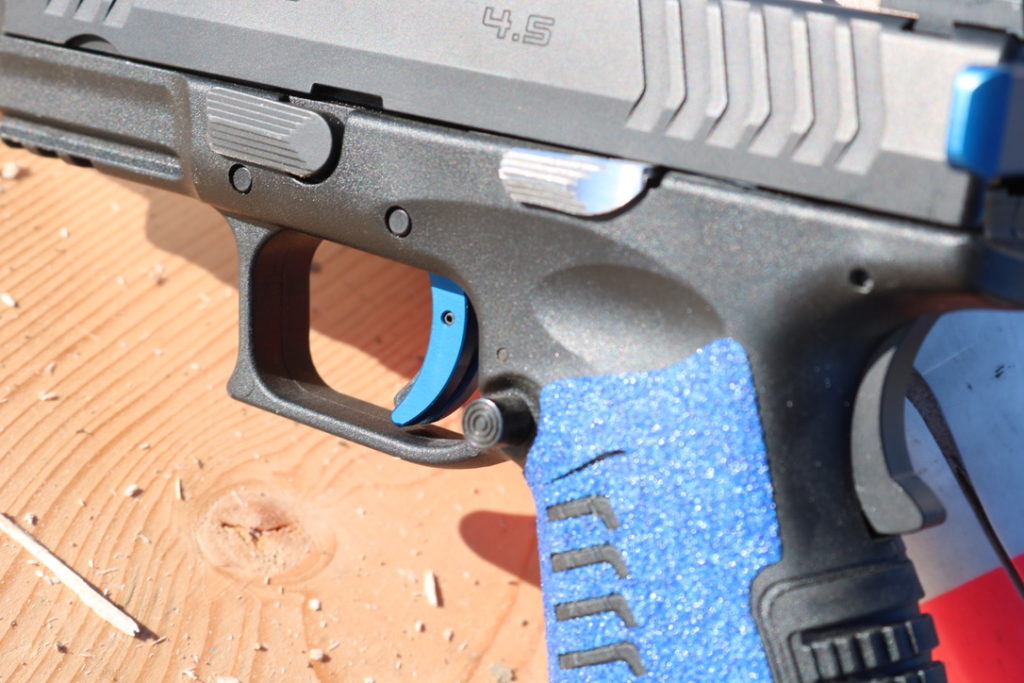 And last but certainly not least, the most critical feature. The Springer Precision trigger job. Almost all factory pistols these days come with a 5 to 6-pound trigger, something I blame on the lawyers. That is fine for a duty piece, but not ideal in a race gun. Springer really hit one out of the park here. They don’t just tune your factory parts, they replace them. The Springer kit is top shelf, finely tuned pieces, all made in house. Installed and adjusted by a master gunsmith, the result is fantastic. My new Springer Precision trigger breaks at 2 pounds, 13 ounces, and is crisp like a 1911. I could not be more impressed with the result, it is absolutely stunning. Easily the best $200 you could spend on your pistol. As an added bonus, the new trigger is bright blue steel, matching the motif of the rest of the gun. 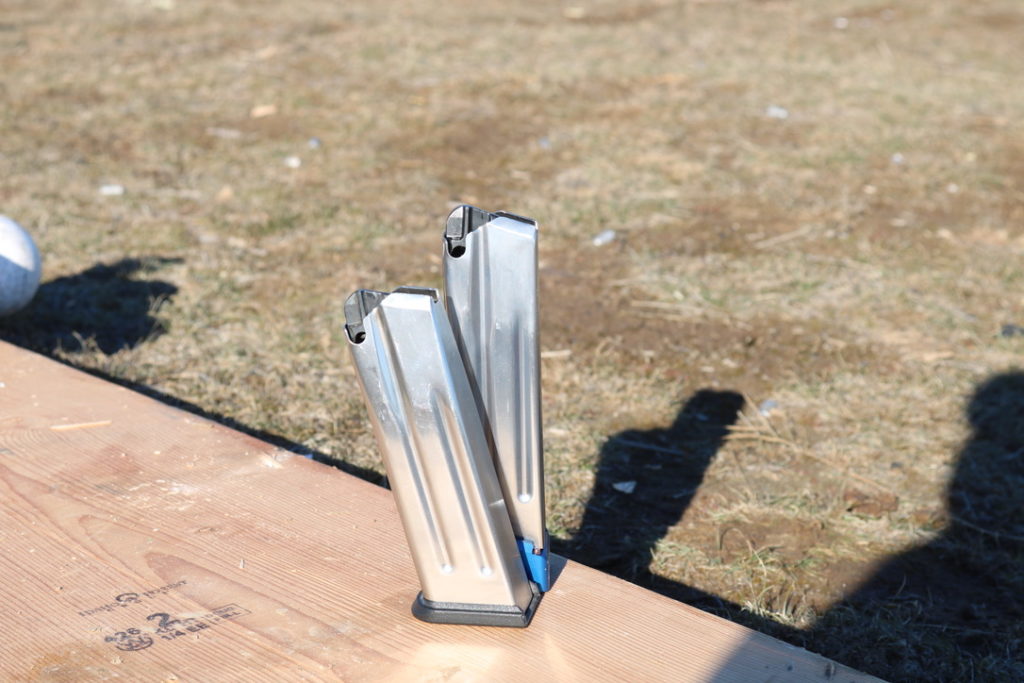 All told, my complete package was right around $600. Not cheap, but still light years ahead of a 2011 in total dollars spent. Springer Precision is the shop of choice when it comes time to upgrade your XDM. Whatever the task for your new 10mm, these guys have the know how to make it happen. 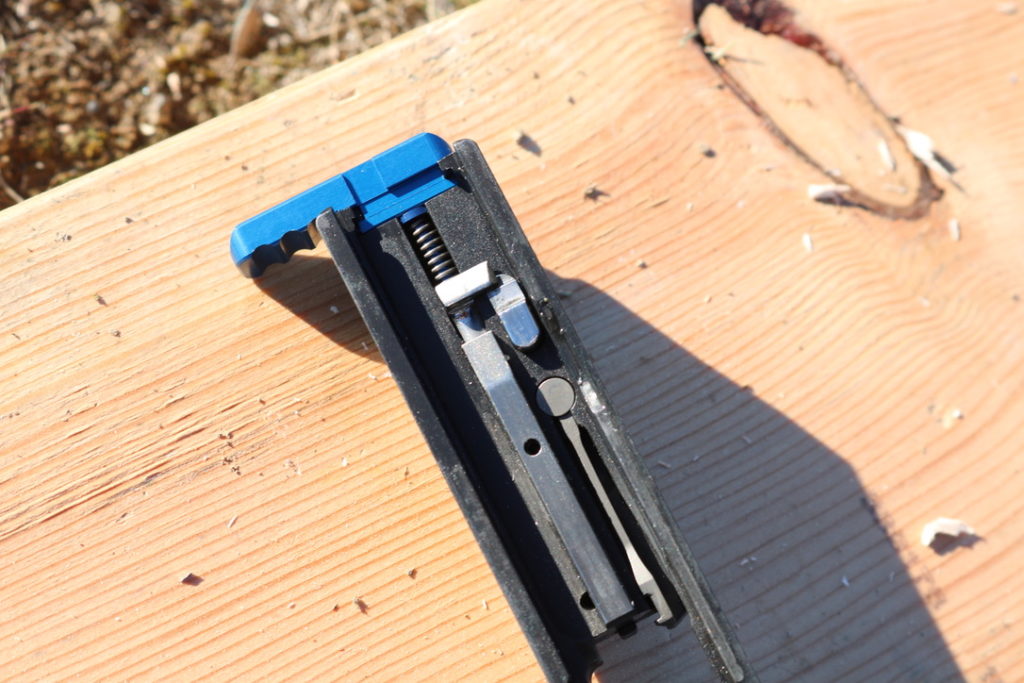