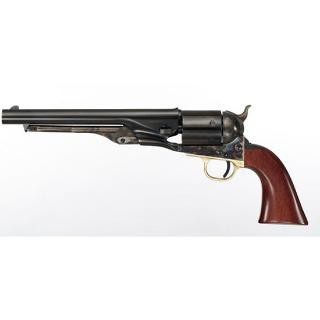 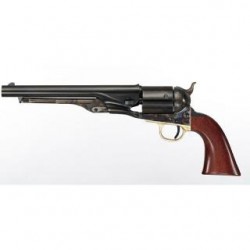 Stock photos provided by the manufacturers may not represent the actual item. Please verify this picture accurately reflects the product described by the title and description before you place your order.

Be first to review this item and help others
1860 Army Long Cylinder Conversion 8 .45LC - During the era when a lot of black powder revolvers were being used to create the initial converted models to accept metallic cartridges the 1860 Long Cylinder model was created. This model was popular and commonly referred to as the long cylinder model due to its cylinder appearing longer in length than the original rebated black powder cylinder on the Army models. Since this model is a replica of the one of the original converted black powder models it does feature original style Army grip parts as well. Additional upgrades have been added to this replica to cater to modern shooters' needs today such as a hidden casing poker in the black powder loading lever and a true loading gate in the frame. Features also include a forged steel case hardened frame round barrel with front blade sight rear sight notch on the rear of the barrel brass triggerguard steel backstrap plain cylinder and an Army-sized walnut grip.

Notify me when available!
Add to wishlist